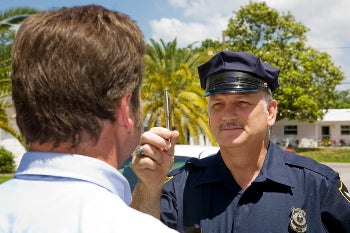 If you face DUI charges in California because of a failed field sobriety test, contact Santa Barbara DUI lawyers at the Aron Law Firm. We understand that field sobriety tests may lead to unjust arrests. That's why we're committed to standing up for our clients' rights and freedoms. Contact us to schedule a confidential consultation to discuss your situation today.

What DUI Field Sobriety Tests Do California Police Use?

Field sobriety tests are a series of physical and mental exercises that act as an objective standard for measuring a person's blood alcohol content (BAC).

These field sobriety tests together are 91% accurate, according to the National Highway Traffic Safety Administration (NHTSA). In other words, these tests deliver incorrect results about 9% of the time. Below are further details regarding each DUI field sobriety test used in California.

How Does the Horizontal Gaze Nystagmus Test Work?

The horizontal gaze nystagmus (HGN) test examines the involuntary twitching eye movement when the eyeball extends to the farthest peripheral. Generally, this jerking eye movement only happens when you look to one side. A person with a high BAC, however, may experience this eye movement all along their gaze. A police officer administers the HGN test by gradually moving a pen or flashlight back and forth in front of a person's eyes.

Police look for three signs of impairment during the test:

If an officer finds that the driver performed poorly on this test, they may arrest the driver for DUI. However, intoxication isn't the only cause for a person's eye to jerk involuntarily. That may also be an effect of wearing contact lenses, taking certain medications, and fatigue.

The walk and turn and the one-leg stand are regarded as “divided attention” sobriety tests that police use in California. While administering the test, the police ask the driver to complete an easy task while listening to instructions. For someone sober, these tasks are generally easy to accomplish. A person with a high BAC, however, may experience trouble executing them successfully.

The Walk and Turn Test

To start, the officer instructs the subject to place their left foot flat on the ground with their right foot directly in front, so the right heel touches the left toes. The driver is then asked to walk nine steps in that same heel-to-toe manner, turn around, and walk nine steps back to the starting point. The driver must do this while counting each step out loud.

During this test, police watch for the following clues of inebriation:

During the one-leg stand test, a police officer may tell the driver to stand feet together, then lift one leg about six inches off the ground. While they are standing on foot, the officer asks the subject to start counting out loud until told to stop.

Throughout this test, police watch for the following signs of impairment:

If the driver displays two or more of these indications, they may be arrested for drunk driving.

Can I Refuse to Take a Field Sobriety Test?

Yes, you may refuse to take a field sobriety test in California. Despite popular belief, these tests are not mandatory, and you are not legally required to take one during a DUI traffic stop; however, refusing to do so may not necessarily improve your situation or help you avoid a DUI arrest.

The goal of field sobriety tests is to provide law enforcement with as much proof as possible to warrant your arrest. If you're pulled over for DUI but are not arrested, your refusal to submit to field sobriety tests may establish probable cause for the officer to arrest you.

Trust the Santa Barbara DUI lawyers with the Aron Law Firm to defend your rights and protect your freedom. Led by former California Deputy District Attorney William Aron, our team of DUI defense lawyers is here to help you develop a thoughtful and effective strategy that may prove your innocence in court. After a DUI arrest in California, contact the Aron Law Firm and speak with an accomplished DUI defense attorney about your situation. Schedule a confidential consultation today by completing a contact form or calling 805-618-1768.