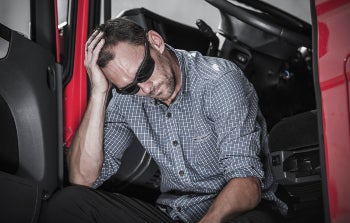 Should you find yourself in this situation, a Santa Barbara commercial DUI lawyer with the Aron Law Firm may help you fight to protect your best interests and achieve the most favorable outcome possible. When you partner with our Santa Barbara CDL DUI attorneys, rest assured knowing that we work vigorously to help fight your DUI charges and maintain your CDL so you may move forward in your career.

Commercial drivers convicted of a DUI in Santa Barbara may be subject to criminal and administrative penalties. In other words, a DUI conviction may lead to adverse criminal consequences and a potential suspension or loss of a driver's commercial license.

Commercial drivers may face these implications if they are caught in any of the following acts:

While all drivers must not exceed a BAC of 0.08% before getting behind the wheel, commercial drivers are held to a higher standard under California's Vehicle Code § 23152(d), which stipulates their BAC must be lower than 0.04%.

What Are Potential Penalties for a CDL DUI in Santa Barbara?

A first-time DUI may result in a CDL operator in Santa Barbara facing the following criminal penalties:

A second or subsequent DUI conviction for a CDL holder in Santa Barbara may require even more stringent penalties. According to California's Vehicle Code § 23153, a repeat CDL DUI may result in felony charges, whether they were driving a personal or commercial vehicle.

May I Lose My CDL Permanently for a DUI in Santa Barbara?

In Santa Barbara, commercial drivers are subject to harsh penalties for misjudgments made behind the wheel. Depending on circumstances surrounding the DUI arrest, penalties may become even more stringent. For instance, if a commercial driver was carrying dangerous cargo when they were stopped and arrested for a DUI, they may be subject to a three-year license suspension.

A commercial driver may lose their CDL permanently in some cases. It's important to note that whether driving a personal car or a commercial semi-truck, the following circumstances may lead to a permanent loss of a California CDL:

While these penalties are severe, the Santa Barbara commercial DUI lawyers with the Aron Law Firm will work tirelessly to lessen the impact of the penalties you may face.

Defending a DUI as a Commercial Driver in Santa Barbara

While the penalties may be significant for commercial drivers convicted of a DUI, this does not have to mean the end of a career or permanent loss of license. There are several defense strategies an experienced CDL DUI attorney may employ to protect your innocence.

The Aron Law Firm's seasoned commercial DUI defense lawyers may devise a thoughtful strategy to refute the prosecution's assertion that you were driving—an essential element of the DUI charge. The following may also be available in your defense:

If you're a commercial driver facing a DUI charge in Santa Barbara, the Aron Law Firm's commercial DUI defense attorneys are here to help. Having a knowledgeable CDL DUI defense lawyer on your side may offer you the best possible chance of achieving the most favorable outcome to your case.

A DUI arrest in Santa Barbara is challenging to navigate alone. A CDL DUI has harsher consequences that may be even more challenging to manage if you face them without a skilled DUI defense lawyer. At the Aron Law Firm, our experienced and highly regarded Santa Barbara commercial DUI defense attorneys are ready to help you fight these charges to help you move forward without the weight of a criminal record of loss of license.

If you've been arrested for a DUI on a CDL in Santa Barbara, do not delay contacting the Aron Law Firm to learn your legal rights and what defense methods are available to you. Schedule a confidential case review today by completing a contact form or calling 805-618-1768.