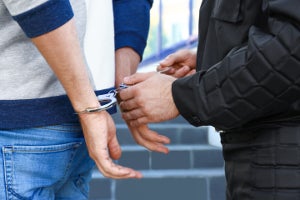 There are three distinct classifications for California criminal charges.  The lowest level crimes are known as infractions, followed by mid-level charges, which are called misdemeanors, and finally, felony charges, which are reserved for the most serious allegations.

Infractions are punishable by fine only and are representative of the lowest level offenses.  Examples of infraction include basic speeding tickets, failure to utilize a turn signal, improper U-turn, and other low-level vehicle code offenses.

Misdemeanors are a mid-level offense and may be punishable by fine and county jail time not to exceed one year.  Many of the most common crimes are classified as misdemeanors. Examples of misdemeanors include most DUIs, driving on a suspended license, or simple battery.

Felony Charge as a “Wobbler” Offense

Some charges may be brought as either misdemeanors or felonies, depending upon the discretion of the prosecution.  These wobbler offenses are defined as crimes that prescribe time in the county jail not to exceed one year OR confinement to the state prison for a term longer than one year.  Many crimes fit into this wobbler distinction, including examples such as burglary, criminal threats, forgery, or grand theft.

If the District Attorney's office elects to file a wobbler as a felony, the judge may later reduce the charge to a misdemeanor on his or her own accord under California Penal Code Section 17(b), which provides discretionary authority for reduction of a felony to a misdemeanor.  If felony charges lead to a felony conviction, it may also be possible to obtain relief after successfully completing any probationary period (assuming the felony sentence provided for probation and not state prison) by filing a PC 17(b) motion alongside a PC 1203.4 expungement petition.

Factors that may contribute to Felony Charges

While the most serious offenses, such as murder, are automatically filed as felonies, there are numerous circumstances where the prosecution has discretion.  Some factors that may determine whether a particular case is filed as a felony may include prior criminal record (or lack thereof), the severity of the facts as alleged, the context surrounding the incident, any applicable mental health or addiction issues that may have influenced the conduct, and the position of the “victim” of the crime.  As to the latter, the filing of felony charges is always up to the prosecutor, not the victim, however, the victim's cooperation and motivation for prosecution may play an important role in the evaluation of the case.

If convicted of felony charges, you may be sentenced to a low, middle, or high term in the California State Prison.  For example, if a felony carries two, three, or four years of prison exposure and the judge selects the mid-term then you would be sentenced to three years in the state prison.   Judges will often weigh “aggravating” and “mitigating” factors at a felony sentencing hearing to determine what felony sentence is most appropriate.

In addition to the very serious penalties that may be associated with a felony conviction, felony charges may also be stigmatizing, leading to adverse consequences for educational, employment, or social opportunities.  Additionally, felony charges might temporarily or permanently impair your right to own or possess firearms.

Finally, if your felony conviction is classified as a “strike” under California's “three strikes law” then future felony charges might have much more severe consequences.

At the Aron Law Firm, we work with you to create tenable solutions to difficult situations.  Give us a call to start a confidential dialogue today: 805-618-1768.