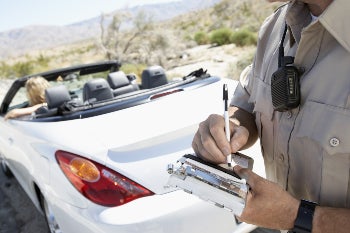 If you have been issued a traffic violation in Santa Barbara, it may be in your best interest to fight it in court, whether you disagree with the charge or want it removed from your record. When you pay a traffic ticket, you are pleading guilty to the traffic offense you have been accused of, which usually results in the addition of points to your license.

With the help of a skilled Santa Barbara traffic ticket lawyer, it may be possible to beat your traffic ticket in court and avoid accumulating points on your driving record.

Traffic violations cover a broad scope of offenses. A traffic offense can range from a minor violation—such as speeding within 10 miles of the speed limit—to more serious offenses, such as reckless driving. Some of the most common traffic violations in Santa Barbara include:

which you were cited. Some of the potential penalties from a traffic ticket conviction include:

If you are charged with speed exhibition in California, you may face serious penalties including:

Driving Without a License

Reckless driving is a criminal offense in the state of California. If you are accused of reckless driving, you may be charged with a misdemeanor that is punishable by up to 90 days in jail and a maximum fine of $1,000.

Driving With a Suspended License

If you are caught driving with a suspended license, you may be charged with a misdemeanor by the California court of law. The penalties you may face for this charge include:

When issuing traffic violations, police officers may make instant judgment calls. They are aware that some ticketed drivers might choose to contest their citations to dispute the charges. While many traffic violations are minor, it may be in your best interest to dispute the violation and preserve a clean driving record. A skilled traffic ticket lawyer may help you develop a strong defense and potentially remove the charge from your record.

How Can I Challenge a Traffic Violation in Santa Barbara?

To get help with challenging any criminal traffic violation in California, it is important that you contact an experienced criminal defense lawyer for help as soon as possible.

There is significant room for error in traffic ticket violations, meaning that your attorney may have several avenues for providing a solid defense to your violation and potentially dismissing the charges and any potential points that might otherwise accrue on your license. If you have been issued with a traffic violation you believe is unfair, contact a quality traffic ticket lawyer in Santa Barbara.

At the Aron Law Firm, our attorneys have a proven track record of minimizing the penalties associated with traffic violations. To schedule an appointment with one of our experienced criminal defense lawyers, call today at (805) 618-1768 or fill out our online contact form.