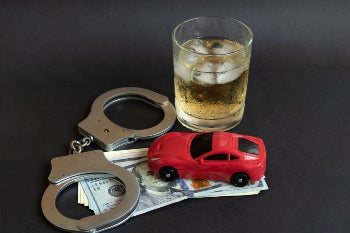 What Happens After I Am Arrested for a DUI as an Out-Of-State Driver?

When California residents are arrested for DUI, their driver's license is suspended by the DMV before any court proceedings begin. As an out-of-state driver, your license suspension follows a different process. When California residents are pulled over for DUI, a police officer takes away their driver's license on the spot and issues a temporary license, which is valid for 30 days. Conversely, when a police officer pulls over an out-of-state resident for DUI, they may not confiscate their out-of-state driver's license. Instead, they may revoke your privilege to drive in California for 30 days. However, your home state will still be notified of your DUI charge and may choose to suspend your license.

California residents and out-of-state visitors follow the same process to fight a suspension. In order to keep your driving privileges, you'll need to file a request for a hearing with the California DMV. It is important to note that you only have 10 days from the date of your DUI arrest to file the request. If you fail to make the request within the 10-day time frame, you may lose your right to the hearing, which could result in a lengthy driving privilege suspension in California.

Requesting a DMV hearing is a crucial step in keeping your driving privileges. Although the hearing itself does not guarantee that you will keep your license, it does postpone the suspension. Since the DMV may not be able to schedule your hearing for months, you might be able to resolve your case in court before they can take action against your driving privilege. Out-of-state drivers do not have to be present in Santa Barbara for their DMV hearing and can choose to have a Santa Barbara DUI attorney handle the court hearing for them.

In DUI cases, the criminal charges are separate from the DMV process. In addition to a DMV hearing, you may need to defend yourself against a DUI charge in the California court hearing. If you are convicted, as an out-of-state driver you will likely face penalties based on both California law and the law in your home state.

Out-of-state drivers facing a first DUI offense in California may incur penalties, including jail time, a suspended driver's license, expensive fines, and mandatory substance abuse school. The state of California will expect you to complete all aspects of your sentence, and your home state will most likely cooperate. This means that your home state may not reinstate your license until California confirms that you have met all the conditions of your conviction.

As an out-of-state driver, you may not have to be present for most aspects of your DUI case, including the DMV hearing and most initial court proceedings. However, if you don't have a lawyer, you will need to be present at every court hearing. If you have secured legal representation, the only part of your DUI case you may have to attend is the trial.

As the trial approaches, the judge will determine whether or not you must appear. However, even if the judge does decide that your attendance is not mandatory, it is in your best interest to attend the hearing. If you don't attend, the jury does not have a chance to place a face to a name and see the person whose future they are deciding. This can have a negative effect on the outcome of your case, since it may be easier for the jury to choose a negative outcome if they don't have to see you in person.

As an out-of-state visitor facing DUI charges, having a skilled Santa Barbara DUI lawyer on your side will substantially improve the legal process. At the Aron Law Firm, we provide clients facing DUI charges with a comprehensive analysis of their case. Our approach prioritizes getting our clients to a better place and understanding their needs at a deep level. By limiting our caseload, we are able to invest more time and energy into each and every case.

To schedule an appointment with an experienced DUI defense lawyer, call today at (805) 618-1768 or fill out our online contact form.