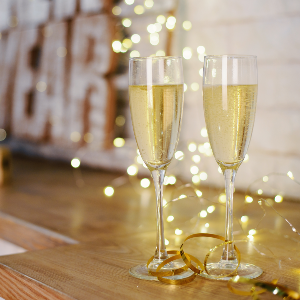 New Year's Eve and New Year's Day are known for parties, the midnight countdown, and a bad hangover. But end-of-year celebrations also present a deadly combination of hazards: traditional celebrations with alcohol, late-night driving, and a disproportionate number of vehicles on the road. It's no wonder that the early hours of January 1st are some of the most dangerous times of the year to be on the road.

Data from the California Department of Motor Vehicles indicates that there are more arrests for DUI on New Year's Eve and New Year's Day than any other 24-hour period. In 2019, there were nearly 500 drunk driving arrests and three alcohol-related deaths in the State of California alone. The National Highway Traffic Safety Administration also found that nearly half of all traffic fatalities during the new year period are a result of alcohol consumption—the most of any U.S. holiday.

It's important that you don't let drunk driving, DUIs, and other alcohol-involved incidents squash your New Year's joy. Here's everything you need to know as we inch closer to 2021.

Why Are There So Many DUI Arrests on New Year's Eve?

New Year's Eve is a symbolic celebration of renewal: out with the old, and in with the new. It seems appropriate to raise a glass in honor of the past and to toast the future. But it's not uncommon for many of us to raise our glasses more often than necessary. In general, the odds of getting into a driving accident increase during periods when there are more cars on the road or when driving conditions are less than optimal. But when the number of alcohol-impaired drivers increases, the odds skyrocket.

Drinking during the holiday season is a normal practice. Old friends and family members get together, companies host holiday parties, and the streets are ornamented with decorations. Such a spike in alcohol consumption tends to become dangerous and deadly, especially considering the other factors at play. Not only are more individuals drinking alcohol, but there are more cars on the road, more people driving late at night, and sometimes poor weather.

The inordinate number of drunk drivers on New Year's Eve and the morning of New Year's Day isn't a secret to the police. Each year, California law enforcement sets up a large number of DUI checkpoints and sends out more patrol units during what they call a “maximum enforcement period.” This interval typically starts on December 30th at 6 p.m. and ends at midnight on January 2nd.

This year, just like any year, you should expect to see numerous DUI checkpoints and patrol vehicles throughout California roadways. If you plan to drink, make sure you come up with a plan to avoid driving under the influence of alcohol.

A little preparation may go a long way to avoid an accident on New Year's Eve. Here are a few pointers that may keep you out of trouble this holiday season:

An arrest for driving under the influence may begin a domino effect of repercussions, potentially causing loss of driver's license, hefty fines, and loss of employment. An expert DUI lawyer will help you build a strong defense and potentially mitigate the damage of a DUI arrest. This year, take a few minutes to plan ahead before going out to celebrate the arrival of 2021 so you avoid a mountain of trouble later.

If you or a loved one is facing a DUI charge, it's important that you speak with a trusted DUI defense attorney as soon as possible. The expert lawyers at the Aron Law Firm, led by former CA Deputy District Attorney William M. Aron, are here to protect your rights by investigating your case in detail and building a robust defense. Our legal team is well versed in DUI defense law and may help you avoid the consequences that stem from this offense.

At the Aron Law Firm, we understand what you are dealing with and have experience protecting clients from a wide variety of criminal charges. We take a client-centered approach to help make the legal process as painless as possible. To speak with a criminal defense attorney, schedule a confidential consultation by giving us a call at (805) 618-1768 or by completing our online contact form today.