Can Possession of a Fake ID Land You in Jail? 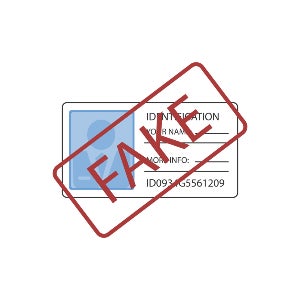 Possessing a fake ID can seem like a relatively innocuous rule break. After all, fake IDs are most often used by college students looking for a fun night out before they turn 21. However, getting turned away from a bar isn't the worst fate you could suffer if a suspicious bouncer asks you to recite your zip code. While many California police officers will confiscate your ID and let you off with a warning, others may take it more seriously. All things considered, what's the worst that could happen if you're caught in possession of a fake ID?

In simple terms, it's a crime in California to possess or display a fake identification card or driver's license with the intent to commit fraud or forgery. This crime is considered a “wobbler,” which means the prosecutor can file the case as either a misdemeanor or felony crime. As a misdemeanor, this crime is punishable by up to one year in jail, a fine of up to $1,000, and misdemeanor summary probation. As a felony, the crime can land you three years in jail, a fine of up to $10,000, and formal felony probation.

What Is Considered a Fake ID and How Can You Be Penalized?

Possession of a fake identification card or driver's license is covered under California Penal Code Section 470b, which defines “fake ID” as a government-issued driver's license or identification card (US passport, Social Security card, or US military card) that's been counterfeited, reproduced, duplicated, forged, altered, or falsified. For example, you've committed a crime if you've changed the name on your ID, created a fake driver's license, or altered the physical description or photograph that appears on the card.

While this crime is most commonly committed by minors attempting to purchase alcohol, fake IDs are also often used to cash a check in another person's name. Likewise, fake IDs cards are also sometimes used by illegal immigrants to avoid arrest by police or to obtain state benefits.

For you to be convicted of using a fake ID, the following must be proven beyond a reasonable doubt:

If you're facing allegations of possessing or displaying a fake identification, call the Santa Barbara criminal defense lawyers at the Aron Law Firm today. We can review the details of your case and put together a solid defense strategy.

Can You Go to Jail for Possessing a Fake ID?

The penalties for a conviction for using a fake ID as a misdemeanor include a fine of up to $1,000 and imprisonment in a county jail for up to a year. A felony conviction may lead to three years in state prison. Fortunately, with the help of an experienced lawyer, you may be able to sidestep the consequences associated with a conviction.

Contact the Aron Law Firm today for further questions about possible jail time for your fake ID or to discuss your case with one of our California criminal defense lawyers. Our knowledgeable lawyers are dedicated to protecting your rights. To discuss your case with a skilled criminal defense attorney, schedule a consultation by calling (805) 618-1768 or completing our online contact form today.