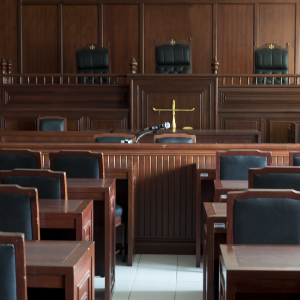 If you’re a criminal defendant who has been accused of a crime, you may face witness testimony as an element of evidence against you. This means that those who witnessed activities or heard information related to your case may take the stand and be asked to offer information that might be used to prove that you committed the crime in question. If this evidence is presented in a way that’s generally consistent with the court’s evidentiary rules, it is typically permitted in a criminal case.

However, as the criminal defendant, you have the right to question these witnesses when they present their information to determine whether they are credible and truthful. This is generally called the “confrontation clause” and is outlined in the Sixth Amendment.

What Is the Confrontation Clause?

The Sixth Amendment provides rights for those accused of a crime. These privileges include the right of the accused “to be confronted with the witnesses against him.” This part of the amendment effectively means that someone accused of a crime may cross-examine any of the witnesses who testify at trial and applies to statements made in court and statements made outside of court that are offered as evidence during the trial.

For some time, this provision only applied to federal cases, as state governments didn’t have to abide by the Sixth Amendment’s restrictions. That all changed after the Fourteenth Amendment was passed in 1866, which subsequently made the right to confrontation applicable to both state and federal courts.

The right to be confronted by witness provides the accused with three specific protections:

The confrontation clause is an important tool that criminal defendants may use to protect themselves from damaging witness testimony. However, it’s also an often complicated provision that requires defendants to carefully evaluate the possibility of future witness testimony and consider what out-of-court statements might be used against them at trial.

After a witness presents their initial testimony on behalf of the prosecution, the defendant’s attorney may then ask questions to elicit other testimony from the witness. In addition, the attorney may cross-examine the witness to shed doubt on their testimony. However, the cross-examining attorney is usually only allowed to ask questions relevant to the facts alleged in the case or similar in scope to what the prosecution asked.

Hearsay is considered testimony from a witness under oath who is reciting a statement from outside the court. Generally, The Federal Rules of Evidence prohibit introducing hearsay statements during applicable federal court proceedings unless certain circumstances apply. Other out-of-court statements, which are not hearsay, are more easily admissible.

In any case, if the person making the statements doesn’t appear in court to testify, using such statements may constitute a confrontation clause violation.

For questions about your constitutional right to confront your accuser or to discuss your case with one of our California criminal defense lawyers, contact Aron Law Firm today. Our expert attorneys are dedicated to protecting your rights by investigating your case in detail, building a robust defense, and strategizing a tactical way to confront and cross-examine witnesses. Our legal team is well versed in California criminal defense laws and may help you avoid the consequences that stem from this offense.

At Aron Law Firm, we have experience protecting clients from a wide variety of criminal charges. We take a client-centered approach that aims to make the legal process as painless as possible. To speak with a criminal defense attorney, schedule a consultation by calling (805) 500-0483 or completing our online contact form today.