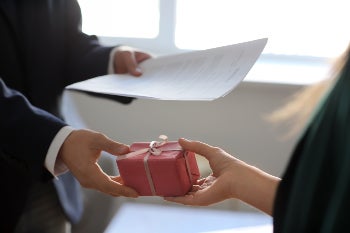 Bribery is an attempt to manipulate another person's decision, judgment, or opinion dishonestly. A conviction for bribery may lead to severe penalties in California, including a jail sentence and high fines. The penalties hinge on the amount of money implicated in the crime. If you or someone you know is fighting bribery charges, it is imperative that you secure experienced legal representation without delay.

At the Aron Law Firm, our Santa Barbara bribery defense lawyers have extensive experience representing white-collar criminal and civil cases, making us a powerful ally in legal proceedings at both state and federal levels. If you face bribery charges in Santa Barbara, please contact our firm to learn your legal options.

What Constitutes Bribery under California Law?

In California, bribery is the act of offering something of value to another person to influence their actions or decisions. California courts may charge both the individual offering and the individual accepting the bribe with a bribery criminal offense. In many cases, bribes are used to alter decisions that may enable political or public corruption.

Often, bribes take the form of non-monetary benefits, including:

Note that a written contract is not necessary to demonstrate that bribery occurred. To garner a conviction, the prosecution must demonstrate intent to give or accept a bribe.

If you give a public official something valuable in exchange for some action for your benefit, that is considered bribery. Keep in mind that public officials constitute a range of individuals, such as:

The prosecutor must demonstrate that you offered or accepted something of value for the purpose of influencing a decision. Both parties need not have agreed to the bribe. You may still be convicted if you offered one, even if it was not accepted.

The prosecution must demonstrate wrongful intent to convict a person of bribery. Additionally, the prosecution is required to provide witnesses or evidence to establish that you had dishonest intentions. At that point, the judge decides the outcome of your case.

Prosecutors in California are not required to provide a particular instance of bribery to convict a defendant. A bribe may consist of common favors, which might appear as innocent gestures. But if you offered or accepted a bribe intending to modify an official decision, you may be proven guilty of this white-collar criminal act.

If you are suspected of having bribed a public official for financial benefit in California, you may be facing life-altering consequences. You need a skilled Santa Barbara bribery defense lawyer in your corner to effectively defend your rights and liberties.

What Are the Penalties for Bribery in California?

In many cases, bribery is charged as a federal crime if the decisions that were modified by the bribe involved the public. If you are found guilty of bribery, you may face the following punishments:

In most cases, bribery is indicted as a felony offense. The time you spend in prison and the amount you pay in fines are usually determined by the category of corruption charges you face, along with the value of money, gifts, or favors involved in the bribe.

While the penalties that accompany a criminal charge for bribery may be worrisome, it is essential to remember that there are legal defense strategies available for this offense. The bribery defense attorneys at the Aron Law Firm have considerable experience in high-stakes litigation. They may analyze your situation to potentially present any of the following legal defenses in your case:

If you have been accused of bribery in Santa Barbara or the State of California, it is essential to hire a skilled bribery defense lawyer immediately to begin devising a strategic defense against the accusations.

Criminal allegations for bribery are severe matters. Sometimes, an act that seems trivial, like donating money to an elected public official, may lead to bribery charges. However, simply because you were accused of this offense does not automatically mean you may be convicted. With the help of an accomplished criminal defense lawyer like those at the Aron Law Firm, you may present various legal defenses to protect your rights, future, and freedom.