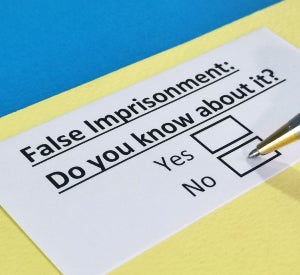 When you partner with California Attorney William M. Aron to defend a false imprisonment charge, you will benefit from having a personalized strategy designed specifically for your case. At Aron Law Firm, our approach is always client-centered so that no matter what your legal concern may be, we will do our best to obtain the optimal outcome for your unique circumstance.

What is Considered False Imprisonment in California?

False imprisonment under California Penal Code Section 236 is defined as “the unlawful violation of the liberty of another.”  Essentially, the law prohibits detaining, restraining, or confining another person against their will.

Some examples of what could constitute false imprisonment are:

If you or someone you care about has been arrested on a charge of false imprisonment, you need Attorney William M. Aron on your side to help protect your future.

What Are the Penalties Associated with California False Imprisonment Charges?

Under PC 237, false imprisonment may be prosecuted as either a felony or a misdemeanor as it categorizes false imprisonment as a “wobbler” offense. While a prosecutor will look at the defendant's criminal record (or lack thereof) as well as any other pending charges in order to determine how PC 236 will be charged, a felony charge can often be distinguished from a misdemeanor case as the felony version of PC 236 generally involves the added element of violence or injury.

When false imprisonment is charged as a misdemeanor, the penalties could include:

A felony PC 236 charge could lead to a sentence that could include penalties such as:

Charges related to false imprisonment may include kidnapping under PC 207 or child abduction per PC 278.  As you can see, the prosecutor has discretion as to what specific charges are filed, if any, and if the defendant will be facing misdemeanor or felony allegations. Accordingly, if you are even suspected of being accused of false imprisonment or similar charges, it is important that you contact an experienced false imprisonment defense lawyer right away in order to open lines of communication with the prosecution before a formal filing determination is made.

A conviction for false imprisonment could affect you for the rest of your life. Any future background checks for employment or housing that pull up your criminal record would show your conviction. Even if your criminal history is clean otherwise, this single charge could thwart your ability to work or secure housing.

Do not risk trying to fight a false imprisonment charge without professional legal defense. When you partner with an experienced criminal defense attorney, they can help defend your case by:

Aron Law Firm could develop a wide range of unique strategies to defend you against false imprisonment charges in violation of California's Penal Code 236.

The most common defense to false imprisonment is consent, which is exactly what it sounds like, meaning the alleged victim gave the accused express or implied consent to restrict his or her movement. Another common defense to PC 236 involves the use of self-defense.  In this instance, the suspect may be justified in restricting another person's movement if he or she may present a credible danger, such as when a wife locks her husband in the garage as he threatens her with a knife in hand.

The other major categories of self-defense may include a shopkeeper's privilege, where a store owner may be able to detain a shoplifter caught in the act until law enforcement arrives.  Similarly, law enforcement officers are granted certain powers to restrain the movement of others during lawful arrests or detentions.  Finally, parents and legal guardians are afforded certain parental powers over their children, which may grant them the ability to restrict the free movement of their children in certain circumstances.

At Aron Law Firm, we have extensive experience defending false imprisonment allegations as well as various other criminal charges. Our team is led by former prosecutor William M. Aron who has worked in all areas of criminal law.

We are here to help. We understand that facing a legal issue can be a stressful and emotional time, which is why we are there for our clients every step of the way. Give us a call to confidentially discuss your case today at (805) 618-1768, or complete our contact form for more information about what we can do to help you.