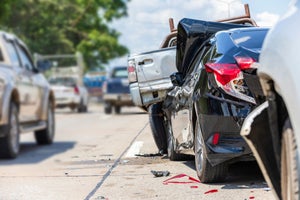 Hit-and-run is a common criminal allegation that may be filed as either a misdemeanor or a felony. Regardless of the specific circumstances surrounding a hit-and-run charge, the consequences can be severe. When prosecutors file hit-and-run charges, they are generally trying to obtain a criminal conviction with a corresponding punishment while simultaneously seeking to recover money in the form of restitution to compensate for personal injury, property damage, or both.

Hit-and-run with property damage only is generally charged as a misdemeanor crime under California Vehicle Code Section 20002(a). The District Attorney's Office may charge a driver of a motor vehicle with a hit-and-run after they are involved in an accident (no matter how minor) and leave the scene thereafter without providing information, such as insurance coverage details. The DA may charge hit-and-run under VC 20002(a) even if the damage did not involve another vehicle. For example, hit-and-run may apply if property such as a parking garage pole or landscaping is damaged and the driver of the vehicle fails to take reasonable and immediate steps to report the incident to the appropriate person(s).

The maximum penalty for a misdemeanor conviction of hit-and-run under CVC 20002(a) is six months in the county jail and a $1,000 fine, in addition to any restitution that may be owed for property damage.

Hit-and-run with injury may be charged under VC 20001 and is classified as a “wobbler,” which means that it may be deemed a misdemeanor or a felony, depending upon the specific circumstances. In order to be prosecuted for VC 20001, the driver must injure another person in an automobile accident and neglect to stop and provide their information in a reasonably timely manner.

Restitution in a Hit-and-Run Case

Restitution involves making the victim of a crime “whole” through the payment of monetary damages. In a VC 20002(a) case, the damages will consist of paying for property damage personally, through applicable insurance coverage, or any combination thereof. Similarly, in a VC 20001(a) hit-and-run case, restitution may involve payment for medical costs and other personal injury related expenses, in addition to any property damage that may have been incurred.

Regardless of whether the hit-and-run charges are brought under VC 20001 or VC 20002, the accused is almost always better off if they are able to make full restitution prior to the conclusion of the case. Prosecutors and judges alike tend to be more flexible once any victims have been made whole financially. This concept generally applies to both misdemeanor and felony hit-and-run cases.

Examples of possible defenses to hit-and-run charges may include circumstances making it unsafe or impractical to stop after the auto accident, reasonable and credible lack of awareness that an auto accident had occurred at all, or a misunderstanding as to who was driving the vehicle at the time of the incident. Regardless of the unique set of facts and circumstances, an experienced hit-and-run lawyer may be able to help you ascertain possible defenses.

Sometimes a skilled hit-and-run defense attorney may be able to devise a plan that may reduce the severity of hit-and-run charges (mitigation) or eliminate them completely (dismissal). One tactic might be to attempt to arrange a civil compromise, which entails making full restitution to any and all victims of the hit-and-run and obtaining a signed statement from said victim indicating that they have been made whole and are not seeking criminal prosecution for hit-and-run or any other criminal charges. While the victim's input may be useful, ultimately the prosecutor must be convinced that this is a just outcome and any arrangement must be ratified by a Superior Court judge.

At the Aron Law Firm, we strive to be thoughtful in all that we do as we craft creative solutions to complex problems. Give us a call to start a confidential dialogue today: 805-618-1768 or complete our contact form.