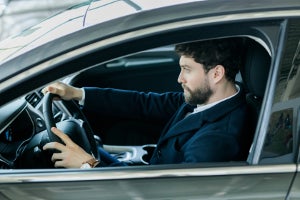 Driving without a license is a crime in California under vehicle code section 12500 and can be distinguished from driving on a suspended license, which may be prosecuted under VC 14601, 14601.1(a), 14601.1, 14601.2, 14601.3 or 14601.5. Driving on a suspended license stems from something the licensee did to willfully violate the law, such as failing to appear in court or disregarding a court-ordered driver license suspension. This can be distinguished from driving without a license under VC 12500, which may be charged for simply driving while failing to obtain a valid driver's license beforehand.

Finally, if your driving privilege is valid but you simply do not have your physical driver license with you while driving, a law enforcement officer may cite you for VC 12951(a), which is an infraction and carries a penalty of a fine only. This can be distinguished from the more serious charge of VC 12951(b), which is a misdemeanor for failure to present a driver's license to a peace officer upon demand, and carries a maximum penalty of up to six months in the county jail.

While typical criminal charges hold prosecutors to a “beyond a reasonable doubt” burden of proof standard, when alleging driving without a license under VC 12500, the District Attorney's Office only need assert that the suspect was driving without a license and then the burden shifts to the defendant to show that he or she was in fact properly licensed at the time of driving.

Driving without a license under VC 12500 is known as a “wobbler” which means that the prosecution has the discretion to file VC 12500 charges as either an infraction or a misdemeanor. While a CVC 12500 infraction is punishable by a fine only, a VC 12500 misdemeanor carries much more severe potential consequences, including a maximum jail term of six months and up to a $1,000 fine.

There are numerous factors a prosecutor may consider before deciding if VC 12500 charges will be filed as a misdemeanor or an infraction. Examples may include prior criminal record (or lack thereof), DMV driving record (infractions and points on license), the facts surrounding the contact with law enforcement that initiated the VC 12500 investigation, and other contextual factors.

Regardless of the viability of any defense to a VC 12500 charge, the defendant should make best efforts to obtain a valid license as soon as possible as this fact may be recognized as a mitigating factor by both the prosecutor and the judge. In any event, it always makes sense to have a criminal defense attorney experienced with driver license issues at your side early in the process.

The Aron Law Firm has substantial experience and an excellent track record with all types of driver license-related criminal cases as well as DMV matters. Contact us or call today to confidentially discuss your case: 805-618-1768.