Understanding the Difference Between Battery and Assault in California 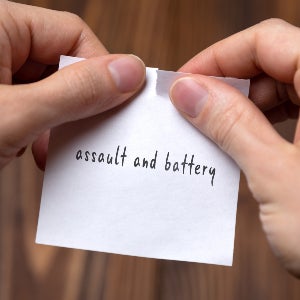 A common misconception criminal law pertains to assault and battery. Many individuals believe that assault and battery are interchangeable crimes because they're often charged together. However, it's important to note that the state of California actually classifies assault and battery as two separate convictions. It's crucial, in this case, that you understand the difference if you've been arrested for either or both crimes. After all, both assault and battery can result in significant penalties, and the defense strategy you and your lawyer put together will entirely depend on the crime with which you've been charged.

In a nutshell, assault occurs when a person commits an act that puts a victim in reasonable apprehension of harmful or offensive contact. Battery, on the other hand, occurs when someone commits an act that actually inflicts harmful or offensive contact on the victim. In this blog, we help you understand a more detailed definition of each crime, how they're distinct, and some of the common misunderstandings you need to know based on California law. Here's a breakdown.

What's the Difference Between Assault and Battery?

Because assault and battery are terms often grouped together, many people don't know that these are separate crimes. Battery is likely what most people think of when they consider “assault and battery.” Battery is a term that describes an interaction when one person touches another using force. Note that this doesn't have to be a violent situation. It may also refer to harmful, offensive, and non-consensual touching. Assault, on the other hand, occurs when a person is attempting to use violence or force on a person. In most situations, an assault will occur first, followed by battery.

Here's what you need to know about each as they pertain to California law:

The state of California defines assault as “an unlawful attempt, coupled with a present ability, to commit a violent injury on the person of another.” In other words, you don't actually have to follow through with the violent (or nonviolent) act to be guilty of assault. What matters is that you have the ability and attempt to injure someone. Simple assault is a misdemeanor punishable by up to 6 months in jail and fines of up to $1,000. If you possessed a deadly weapon at the time, the crime may be a misdemeanor or felony conviction and may result in up to four years in prison and up to $10,000 in fines.

California Penal Code 242 PC defines battery as “any willful and unlawful use of force or violence upon the person of another.” In other words, if the assault is an attempted attack, battery is the attack itself. With this in mind, it's easy to see why both crimes are often charged at the same time when a defendant attempts to injure someone else and succeeds. Battery is a misdemeanor punishable by up to $2,000 in fines and imprisonment in county jail for up to 6 months. Aggravated battery, which involves the willful use of violence or force on another person causing serious bodily injury, may be charged as a misdemeanor or a felony.

Whether you're facing assault or battery charges, or both, it's essential that you protect your rights. Contact the Aron Law Firm for legal assistance today.

Are you a California resident who'd been arrested for assault, battery, or both? If so, you may benefit from the assistance of knowledgeable legal professionals from the Aron Law Firm. Our skilled team has a wealth of experience helping to defend clients across the state of California from a wide variety of criminal charges, including assault and battery. We understand how stressful this time in your life can be, which is why we dedicate ourselves to the well-being and security of each and every one of our clients. For any additional questions about the difference between assault and battery or to discuss defense strategies, contact us today.

The Aron Law Firm has years of experience providing thoughtful, intelligent, and compassionate representation to our clients. We partner with you so that when your case is over, you'll feel confident that retaining our firm was the best decision you've ever made. We understand that each client has their own unique set of circumstances and needs, which is why we treat each of our clients like a person, not another case number. To get in touch with a criminal defense attorney today, schedule a consultation by calling (805) 618-1768 or completing our online contact form.