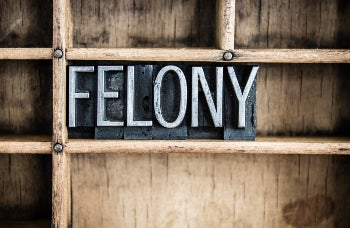 A felony offense in California is a serious crime that may be punishable by a maximum penalty of more than one year in a jail or state prison, along with fines up to $10,000. Depending on the circumstances surrounding the offense, some felonies may even be punishable by death. A judge may also sentence a felony offender to formal (felony) probation as an alternative to a lengthy prison sentence. In that case, a felony offender may only serve a maximum of one year in jail.

At the Aron Law Firm, our Santa Barbara felony defense lawyers understand the seriousness of your legal situation after you have been alleged of committing a felony crime. If you're facing felony charges, the prosecution may seek the harshest sentences suitable in California criminal court. Without an adept Santa Barbara felony defense attorney by your side, you may be risking your freedom.

What Crimes Are Considered Felonies in California?

Felonies are outlined under California Penal Code 17(a) and are considered more serious criminal offenses than misdemeanors. A “straight” felony is one that's indicted and punished strictly as a felony, whereas a “wobbler” is a felony which may be charged as –– or reduced to –– a misdemeanor. In California, most serious criminal offenses are straight felonies, which may also count as “strikes” per California's three-strikes law.

Felony offenses in California may include but are not limited to:

Some crimes, known as wobbler offenses, may be prosecuted as a felony or a misdemeanor crime, depending on the prosecutor's judgment. Considerations that a California prosecutor may take into account when determining whether to charge a wobbler as a felony or a misdemeanor may involve the particular facts surrounding the case, along with the defendant's criminal record.

Examples of wobbler felonies in California may include:

What Are Potential Penalties for a California Felony Offense?

Penalties for felony offenses in California may include fines along with incarceration in jail or California State Prison. The judge may impose fines up to $10,000 as a supplement to—or instead of—a jail sentence. When the California statute defining the crime does not specify the amount of an imposed fine, a judge may require up to $10,000.

The lengthy imprisonment sentence is generally determined by whether the felony is punished for either a low, middle or high term. Some criminal statutes explicitly define these terms and whether the punishment is to be carried out in county jail or state prison. For example, California Penal Code 461(A) stipulates that first-degree burglary is to be punished by a California State Prison term of two to six years.

As an alternative, a California judge may sentence a felony offender to felony probation instead of a lengthy prison sentence.

Collateral Consequences of a Felony Offense

May a Felony Conviction Be Expunged?

It may be possible to have a felony conviction expunged in California. For you to qualify, the courts must have granted felony probation, which then must be completed successfully. While an expungement might not completely erase a felony from a criminal record, it does relieve an offender of many restrictions and the adverse effects of a conviction.

To qualify for an expungement of a misdemeanor or felony conviction in California, an offender must meet the following criteria:

If you face felony charges in California, you do not need to resolve this challenging situation on your own. Contact the Aron Law Firm in Santa Barbara, California today for a confidential case review. Our seasoned criminal defense lawyers may evaluate your case and help you devise a robust defense to counter the accusations against you to seek the best result possible for your case.

The Aron Law Firm is led by former California Deputy District Attorney, William M. Aron, who has litigated on behalf of and against some of the world's most expansive law firms. The criminal defense attorneys at the Aron Law Firm have accumulated significant judicial experience in criminal law fields, making them a steadfast ally in almost any situation.

To speak with a dedicated criminal defense attorney about your situation, schedule a consultation by completing a contact form or calling (805) 618-1768.