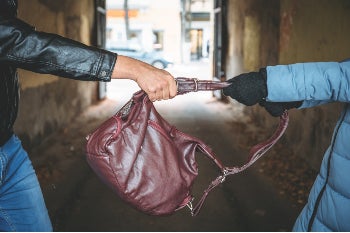 California property crimes including theft, robbery, burglary, and fraud are among the most common criminal charges filed in California. Robbery, in particular, is a felony offense that may lead to serious repercussions if you are convicted. If you're facing a robbery charge, it's important that you consult an experienced California robbery defense attorney as soon as possible. Depending on the circumstances of your case, a trusted robbery defense attorney may be able to reduce the charges or even secure a dismissal of the case altogether.

From common defenses to its legal definition under California law, here's everything you need to know about robbery charges in the Sunshine State.

What Is the Definition of Robbery in California?

Robbery is defined by California Penal Code 211 as:

“…the felonious taking of personal property in the possession of another, from his person or immediate presence, and against his will, accomplished by means of force or fear.”

The California Penal Code separates robbery into two distinct categories depending on the circumstances surrounding the commission of the offense. First-degree robbery occurs when the victim is robbed while inside of an inhabited structure, while using an ATM, or while in a vehicle. All other robbery offenses that aren't considered first-degree robberies are charged in the second-degree.

Differences Between Robbery and Other Theft Crimes

It's important, as well, to make the distinction between robbery, burglary, and theft, as each crime has a different definition and accompanying penalty. A robbery charge specifically punishes the act of taking someone else's property from the victim's “immediate presence” through “force or fear.” If you don't use force or fear or if the property isn't in the person's immediate presence, then the crime is simply a theft.

Burglary, on the other hand, refers to the entering of a building or property with the intent of committing a theft or a crime that would be deemed a felony. A person may be convicted of burglary even if no property is stolen or if there was no interaction between the victim and the alleged burglar.

Defenses to Robbery Charges in California

There are several methods to defending against robbery charges in California depending on the circumstances of your case. They include:

If you've been charged with robbery in the state of California, keeping your record clear of a conviction is critical. The expert attorneys at the Aron Law Firm, led by William M. Aron, are dedicated to protecting you against your accusations by investigating your case in detail and building a robust defense. Our lawyers are well-versed in protecting clients from robbery charges and serve to help them avoid the consequences that stem from the alleged offense.

Our firm takes a client-centered approach and aims to make the legal process as painless as possible. To speak with a Santa Barbara robbery defense attorney, schedule a consultation by completing our contact form or calling us at (805) 618-1768.