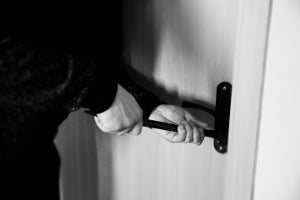 There is a common misconception that burglary refers to any kind of theft. While this works perfectly fine in casual vernacular, the California penal code has an extensive explanation of what burglary is under California law. California Penal Code 459 specifies two types of burglary: first degree and second degree and can be applied to any act involving entering a commercial building, residence, or a locked vehicle with the intent to commit theft or any felony therein.

Parsing such a complex and variable law is not something you should attempt without expert legal help. If you have been accused of burglary in Santa Barbara, California, be aware of the minutiae of burglary laws and what defense you may need to protect your rights and freedom.

To be convicted of burglary, a prosecutor must prove two things: First, you must have entered a building (residential or commercial), a room within a building, or a locked car. Second, you must have intended to commit theft or any felony upon entering one of these spaces. If these two factors cannot be shown, you will likely not be convicted of burglary. Note that one not actual need to have actually committed a theft or a felony inside the structure, but rather must only have intended to commit a theft or a felony to be prosecuted for residential or commercial burglary.

It is important to note that California law defines “entering a space” as an individual having either their body or an object in their possession cross the outer boundary of the space in question. As long as this entered area does not belong to them, the prosecutor may make an accusation of burglary. Because this definition allows many different places to qualify as a space not owned by the alleged burglar, it is vital to have an experienced criminal defense attorney on your side to prevent the state from taking advantage of this vague interpretation.

Whether or not you committed a felony of burglary once you trespassed is irrelevant according to California law. If the intent to commit a felony is evident, the prosecution will pursue a charge. There are other offenses related to this crime that may affect the outcome of your burglary case, including:

What are the Penalties for Committing Burglary?

If you are found guilty of burglary, you face a host of devastating consequences that could potentially alter your life forever. Typically, a burglary of the first degree may receive up to six years in prison, a strike under the California Three Strikes Law, and harsh fines. There is also a second-degree charge that the court may treat as a “wobbler,” meaning the offense may be classified as a felony or a misdemeanor depending on several factors, such as:

A prison term of up to three years is possible if the burglary is charged as a felony of the second degree, while first-degree burglary may carry a prison sentence of up to six years. This is in addition to fines, restitution, rehabilitation programs, and a potential strike under California's Three Strikes Law.

What Factors Can Aggravate Sentencing?

Despite being charged with the crime of burglary, there are many strategies that an experienced criminal attorney may use in a defense. From mistaken trespassing to retrieving an item you genuinely thought belonged to you, mitigation or a complete defense may be obtainable. This may only be possible through the use of a knowledgeable Santa Barbara attorney with a proven track record of successfully defending burglary cases.

The consequences of a burglary conviction in Santa Barbara go beyond jail time, fines, and a marred record. If you fail to secure an experienced criminal defense attorney, you could also face damage to your reputation in your community and among family members. Crimes involving theft and burglary require swift and aggressive defense strategies to prevent the prosecution from manipulating the facts of your case.

At the Aron Law Firm, we take your rights and future seriously when we make our commitment to achieve the best possible outcome for your criminal case. With many years of combined experience as attorneys working for the state of California and for private clients, we put our knowledge and successes within the justice system to work for you right away. Take the important step of protecting your rights and freedom today by contacting our office today at (805) 618-1768 or online to schedule a confidential case evaluation right away.