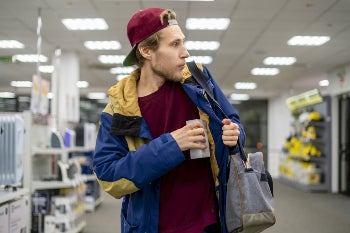 Petty theft –– also known as shoplifting –– is not uncommon in the Santa Barbara area. Some individuals charged with petty theft may believe that taking a relatively small item without paying for it is nothing to worry about, so long as no one gets hurt. However, petty theft is a criminal act under the California Penal Code, and a conviction may lead to severe consequences like fines, probation, or time in jail.

Petty theft is defined under California's primary theft statute, Penal Code 484, which makes it illegal to take someone else's money or property without the owner's permission. Theft of property valued at less than $950 constitutes petty theft. When the value exceeds $950 or a person steals a vehicle or firearm, they may face a charge of grand theft.

Under California Penal Code 484, there are various forms of theft, including:

Petty theft is a severe crime that may hold harsh penalties. California prosecution takes theft crimes very seriously. Having quality representation to defend against theft-related charges may make the difference in your case.

What Are Possible Penalties for Petty Theft in Santa Barbara?

Petty theft may be charged as a misdemeanor offense in Santa Barbara. If you are convicted, you may face criminal penalties that include:

California Penal Code 496(c) also provides for potential civil penalties in addition to those imposed by the criminal court for a conviction of petty theft. Any person who suffers losses caused by theft may seek the following in a civil lawsuit:

Thus, if a person is convicted of stealing a computer accessory worth $500, the rightful owner may pursue up to $1,500 in damages, along with other legal costs.

What Defense Strategies May Be Used Against Petty Theft Charges?

Criminal defense lawyers with the Aron Law Firm may use various defense strategies against petty theft charges in Santa Barbara, including:

Along with presenting effective legal defenses, petty theft lawyers at the Aron Law Form may also negotiate with prosecutors to acquire a favorable plea bargain to lessen charges, reduce penalties, or withhold a conviction from your record. Ultimately, your defense is determined by the facts surrounding your case. Contact the Aron Law Firm to schedule a confidential case review to discuss your situation in detail to discover the best legal avenues for resolving your case.

At the Aron Law Firm, our highly skilled Santa Barbara petty theft defense lawyers are ready to help you. If you or a loved one has been charged with petty theft in Santa Barbara, contact the Aron Law Firm as soon as possible so you may learn about your legal rights and options for a robust defense. Schedule a confidential consultation today by completing a contact form or calling 805-618-1768.