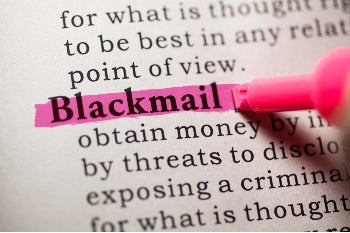 The white-collar crime of extortion occurs when someone forces or threatens another person to provide money, property, or compel a public official to neglect or perform an official act. An example of extortion is when an individual threatens to expose the extramarital relationship of a government official unless the politician pays them money. Commonly referred to as “blackmail,” extortion may be prosecuted federally or at the state level in California depending on the circumstances.

Our California extortion defense lawyers at the Aron Law Firm have garnered significant white-collar criminal and civil defense experience, making us an effective ally for clients in state and federal courtrooms. If you're confronted with extortion charges in California, please contact our criminal defense firm in Santa Barbara to learn how we may be able to help.

When Is Extortion a Criminal Offense in California?

Extortion is a felony offense defined under California Penal Code 518 as:

“…the obtaining of property or other consideration from another, with his or her consent, or the obtaining of an official act of a public officer, induced by a wrongful use of force or fear, or under color of official right.”

Note that the broad definition of extortion involves a wide spectrum of activity that may lead someone to commit extortion under this statute without intentionally doing so.

To garner an extortion conviction in California, the prosecution must prove the following elements:

When it comes to extortion, the suspected victim may give consent unwillingly. The key is that it must be given due to the unlawful use of force or fear. The threat must be the deciding factor for the alleged victim offering their consent. Threatening to act in a way that is within a person's legal rights is not a threat to commit injury.

How Severe Are Consequences for Extortion in California?

Extortion is a felony offense in California that may involve severe penalties upon conviction. While extortion typically doesn't involve any physical violence, the repercussions may substantially damage the financial security of individuals, families, businesses, or governmental offices.

Anyone charged with extortion faces a felony charge in California, for which the penalties may include:

Depending on the circumstances surrounding the case, a judge may grant a defendant formal probation in place of a prison sentence. The California extortion defense attorneys at the Aron Law Firm work tirelessly to minimize penalties for extortion so our clients are able to move forward in life while maintaining their freedom to the greatest extent possible.

While being indicted for the criminal act of extortion may be daunting, the extortion defense lawyers at the Aron Law Firm have vast experience defending all aspects of extortion and other white-collar crimes. Even if you believe your situation is beyond hope, our skilled criminal defense lawyers possess the legal knowledge to create a powerful defense against extortion charges.

Potential strategies we may utilize in your legal defense may involve showing that:

The most important thing is to consult a knowledgeable California extortion lawyer immediately after discovering that you are suspected of blackmail. The Aron Law Firm's criminal defense attorneys in Santa Barbara are prepared to thoroughly investigate your case while assessing the prosecution's evidence to refute charges against our clients with tenacious representation and strategic legal defense.

If you are under investigation for extortion or you are the victim of extortion in California, do not wait to contact an experienced criminal defense attorney. William M. Aron of the Aron Law Firm is a skilled litigator with a reputation for delivering exceptional results defending clients who face all varieties of white-collar crimes in Santa Barbara, including extortion.

At the Aron Law Firm, we know how stressful confronting white-collar criminal charges such as extortion may be, and we're here to make the legal process as painless as possible while fighting for the most favorable outcome. To speak with our knowledgeable California extortion defense attorneys about your situation, schedule a confidential case review today by completing our contact form or calling (805) 618-1768.