Possession of Marijuana With Intent to Sell 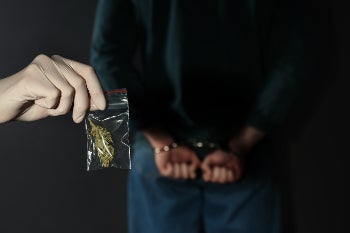 Although recreational and medical marijuana use are legal in California, there are still marijuana laws that—if broken—may lead to criminal charges. Specifically, California Health and Safety Code 11359 prohibits the possession of marijuana with intent to sell, usually suspected when marijuana is found in large quantities. Intent to sell convictions are serious and may lead to lengthy jail sentences and expensive fines. If you have been charged with intent to sell marijuana, you should consult with a skilled Santa Barbara drug defense attorney.

California Health and Safety Code 11359 establishes the possession of marijuana with intent to sell as an illegal act. You may be found in breach of HS 11359 if you are found guilty of any of the following:

The law establishes two kinds of possession: actual and constructive. Both may be eligible for criminal charges. Actual possession extends to those who had physical and exclusive control of the marijuana in question. For example, this would include people who were the source of contact in a transaction and physically handed the drugs to a buyer. Constructive possession extends to people involved in a marijuana sale who did not physically perform the exchange but were in control of the transaction. For example, this would include people growing marijuana in their backyard but using a third party to sell the drug for them.

It is important to note that the code does not establish any quantity as a benchmark for implying an intent to sell. This means that even if you are suspected of selling a small quantity of marijuana, you may still face criminal charges.

Possession of Marijuana with Intent to Sell: The Prosecutor's Approach

To convict you of possession with intent to sell, a prosecutor will have to prove beyond a reasonable doubt that the aforementioned elements were present in your case. Most of the elements that constitute an intent to sell conviction center around a defendant's mental state or internal thoughts at the time of their arrest. This poses a challenge for prosecutors. For example, it may be challenging for the prosecution to prove beyond a reasonable doubt that possession of a large quantity of drugs in and of itself implicates your intent to sell.

Some of the circumstantial evidence the prosecution may rely on to garner a conviction may include:

These are just a few pieces of circumstantial evidence the prosecution may use to establish their argument. If you have been charged with possession with intent to sell marijuana, you should consult with a skilled drug defense attorney.

The Potential Penalties of Marijuana With Possession With Intent to Sell

The best way to minimize the risks associated with a marijuana with intent to sell charge is to consult with a skilled drug defense attorney. An experienced criminal defense attorney may look at all the factors surrounding your case and develop the best defense strategy for your situation.

Common Defenses to Possession for Sale Charges in California

The legalization of medical and recreational marijuana use in California allows for strong potential defenses against intent to sell marijuana charges. Some of the most effective defenses a drug defense attorney may use include:

These are just a few of the potential defenses against marijuana related charges under California Health and Safety Code 11359. The specific defense strategy your attorney will use will depend on the circumstances of your case.

If you are facing a marijuana possession with intent to sell charge in Santa Barbara, the Aron Law Firm is here to help. We provide clients facing marijuana possession charges with a comprehensive analysis of their case. Mr. Aron and his team work tirelessly to obtain the optimal outcome. By limiting our client roster and the associated caseload, we are able to give more time and attention to each and every case.

To schedule an appointment with an experienced marijuana possession defense lawyer, call the Aron Law Firm today at (805) 618-1768 or fill out our online contact form.