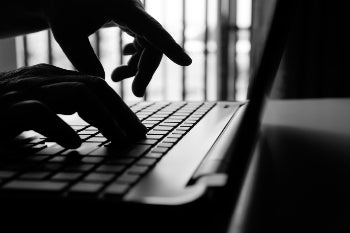 As a growing number of people depend on the internet to manage their finances, daily activities, and connect with others, the anonymous nature of working behind the computer screen has led to an alarming rate of deceptive practices using social media, email, and other online gateways. One report shows that the number of online connected devices is expected to increase from 35 billion in 2021 to 75 billion by 2025—making cybercrime a growing threat to companies, government agencies, and individuals with inadequate cybersecurity.

In California, prosecutors take a harsh stance against individuals suspected of committing internet crimes, imposing a range of penalties for those convicted. If you've been charged with an internet crime, remember that early representation is essential. Contact the experienced California cybercrime lawyers at the Aron Law Firm in Santa Barbara for skilled legal counsel regarding your case and learn how we may help. Keep reading to learn more about how prosecutors handle cybercrime at the federal and state California's cybercrime laws so you may be informed on how prosecutors handle these criminal charges.

California Penal Code 502 PC makes activities related to the unauthorized access of a computer, software, data, or computer network illegal. Under this statute, an individual may be accused of committing internet crime for the following acts:

Also known as the “Comprehensive Computer Data Access and Fraud Act,” this code section makes damaging, altering, deleting, destroying, or otherwise using any computer data without permission punishable as a misdemeanor or a felony with penalties that may include up to three years in jail.

What Are Common Types of Cybercrimes in California?

California courts use “cybercrime” as an umbrella term to describe the use of the internet, a computer, or a telecommunications network to commit fraud-related crimes. Below are some of the most frequently prosecuted types of cybercrimes in California.

Schemes to Defraud through the Internet

You could be charged with this crime if you use a computer to take part in a plan to carry out the three elements of fraud for which the general definition is:

For example, if you advertise items for sale and accept payment for them but never deliver them to the buyer, you could be charged with this offense. Even if you deliver the items but they fail to meet the product description that prompted the buyer to purchase them, you could be criminally charged. Another typical example of a scheme to defraud through the internet involves sweepstakes and lottery programs where a person is convinced to pay a fee for a prize that does not exist.

Also known as “hacking,” unauthorized computer access describes the act of accessing a server, website, or other online systems by using another person's account information. According to a Forbes article on internet security, a hacker attacks someone online every 32 seconds, translating to a cybercrime being perpetrated about 2,244 times each day.

Hacking may be done by physically accessing a computer or more sophisticated methods where hackers may operate halfway across the world when accessing a network.

Phishing is an increasingly common internet crime that describes the act of obtaining personal identifying information (PII) from a victim using trickery by imitating a credible company, website, or person. Phishing is a specific type of identity theft since the victim intentionally provides their information. Likewise, spoofing is the criminal offense of fabricating an I.P. address to gain a victim's confidence that they are communicating with a trustworthy entity.

PII may include, but is not limited to:

In light of the COVID-19 pandemic, phishing attacks have become increasingly common. According to recent statistics, Google registered over two million phishing sites in January 2021, making the number of phishing sites and attempts increase by more than 27 percent in the past year alone.

Federal Prosecution of Cybercrime in California

Cybercrimes may be prosecuted under California statutes by the District Attorney's office in the county where the suspect committed the crime. However, depending on the circumstances, they may also be prosecuted federally by the United States Attorney General. Federal laws that make internet crimes punishable at the federal level include:

Any illegal conduct that involves the use of telecommunication networks may be prosecuted at the federal level. If you believe that you're under federal investigation for any cybercrime or other offense, please contact the Aron Law Firm's experienced cybercrime defense lawyers for professional legal advice.

Penalties for Cybercrime Charges in California

The consequences for a conviction of an internet crime may be severe. You may be charged by state or federal authorities depending on how you perpetrated the alleged offense, where you were located, and where the victim was located. Note that cybercrimes that have been carried out across state borders are federal violations.

If indicted at the state level, California prosecutors may charge internet crimes as a “wobbler” offense, meaning that it may be either a misdemeanor or felony charge, depending on the details of the particular offense.

Penalties for a cybercrime offense in California may include:

When deciding whether to prosecute a cybercrime as a misdemeanor or felony offense, the prosecution will usually analyze the severity of the crime, how many victims were involved, and whether you have a previous criminal record.

While a criminal charge for cybercrime may be a worrying experience, the California cybercrime always at the Aron Law Firm has vast experience in high-stakes litigation in cases such as these. Whatever the state or federal internet crime allegations you may face, various strategies may be used in your legal defense, including:

If you are charged with committing a cybercrime, the prosecutor must demonstrate that you “knowingly” participated in the computer-based act and did so without permission or authorization. Thus, if you unknowingly committed an internet crime, it may be challenging for the prosecution to establish this element of knowingly committing the crime to garner a conviction.

If you're confronted with criminal charges or being investigated for internet crimes, experienced legal counsel is essential from the start. The Aron Law Firm is a criminal defense firm in Santa Barbara led by William M. Aron, who takes a client-centered approach in all that he does. Mr. Aron served as a former Deputy District Attorney, where he earned extensive trial experience prosecuting hundreds of criminal cases. In his private practice as a cybercrime defense lawyer, he fights for the underdog and works to hold the government accountable. To speak with a skilled California cybercrime defense lawyer at the Aron Law Firm, schedule a case review by completing a contact form or calling (805) 618-1768.